The Netherlands did a solid job hosting and organising the CEV Continental Cup Final in the Hague. And in addition to having a great event at Scheveningen Beach, it paid off with a ticket to Tokyo 2020 for their women’s team. 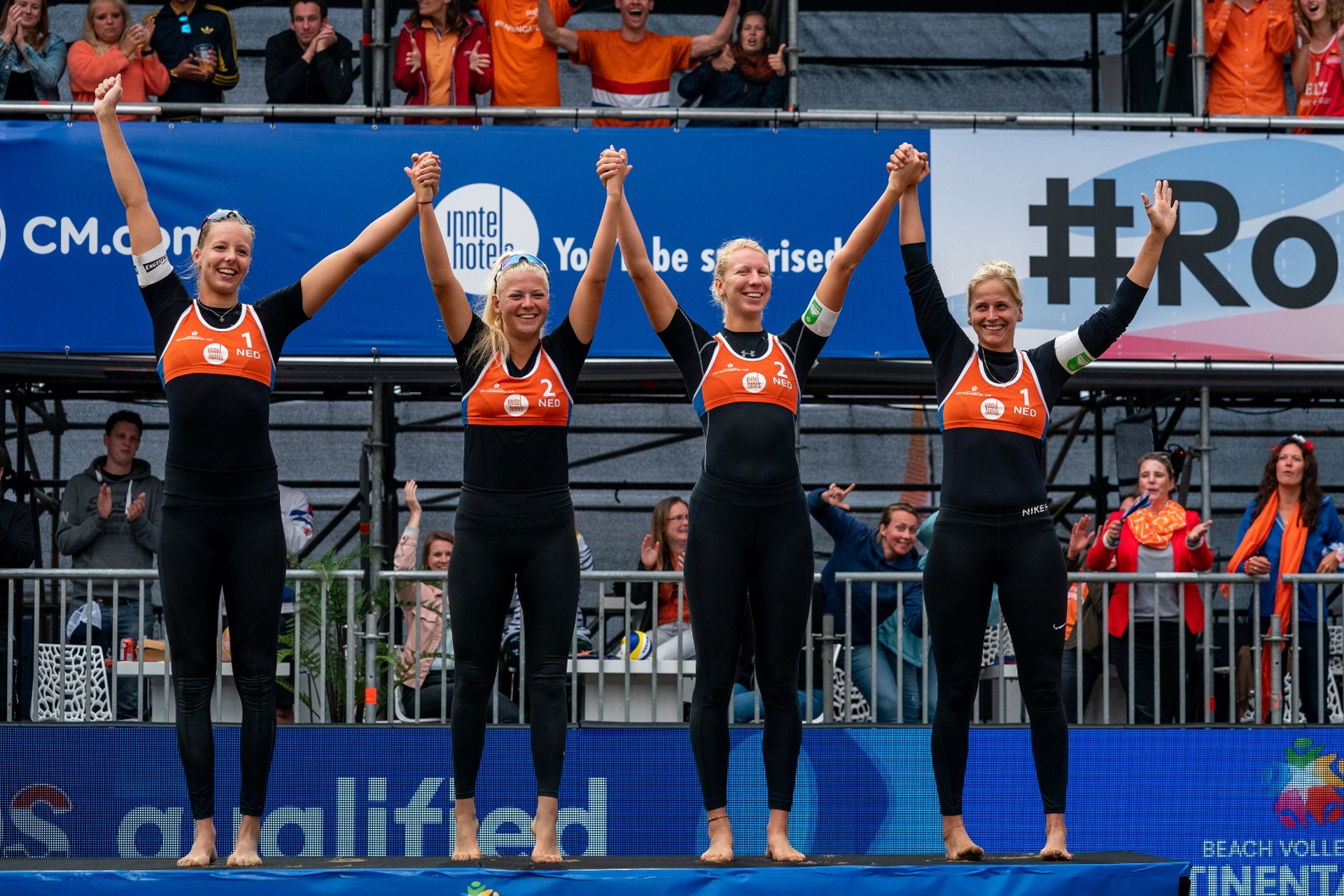 To keep the adrenaline high and make the achievement even sweeter, the four Dutch girls defeated all four of their opponents, with three golden matches deciding the last three ties. In all three of these golden matches, it was rising stars Raisa Schoon & Katja Stam who took the responsibility to take to the sand and secure the team’s golden run for the Daruma doll. But it ain’t over yet...

On Sunday afternoon, the very next day after the end of the Continental Cup Final, the two Dutch pairs will go up against each other to determine who will actually take advantage of their common success and make the trip to the Japanese capital next month, alongside compatriots Sanne Keizer & Madelein Meppelink, who qualified earlier through the international ranking.

The race between the two duos, Raisa Schoon & Katja Stam and Marleen Ramond-van Iersel & Pleun Ypma, actually started earlier this year on the FIVB World Tour as the Dutch federation decided that whichever team achieves the best result on the Tour will gain the Olympic spot should one be earned by the country through the Continental Cup.

Van Iersel & Pleun did better than Schoon & Stam in Doha. The latter took a ninth place at the second Cancun four-star. A week later, the former snatched a fifth at the third Cancun event. At the very last opportunity to catch up, the Ostrava four-star in early June, Schoon & Stam did just that. Within an amazing run, starting from the qualifiers and including a victory over Brooke Sweat and legendary Kerri Walsh Jennings, which put an end to the American pair’s Olympic aspirations, Schoon & Stam had top Brazilian pair Agatha Bednarczuk & Eduarda Santos Lisboa as the last obstacle to that coveted fifth place. The Dutch tandem stunned the Brazilians by hammering out an emphatic 2-0 (21-17, 21-15) shutout and stayed in contention for Tokyo 2020. With the fifth place as the best result for both Van Iersel & Pleun and Schoon & Stam, they will have to go through a crucial Olympic trial match against each other.

As Continental Cup Final hosts, the Netherlands did not need to take part in the first two phases of the competition. At Scheveningen Beach, they started off with a straightforward victory over Estonia in the eighthfinals, cruising to convincing straight-set wins in both rubbers.

This is, however, where the bumpy last stretch on the Road to Tokyo started. In the quarterfinals, Van Iersel & Ypma lost the first rubber to Spain, but Schoon & Stam came in to fix the glitch with two consecutive clean slates in the second rubber and the golden match.

The Netherlands started their semifinal tie against Norway with a nail-biting tie-breaker win for Van Iersel & Pleun, but Schoon & Stam wasted that advantage by losing the second rubber in straight sets to Ingrid Lunde & Emilie Olimstad. Surprisingly, it was once again Raisa and Katja who took to the court for the golden match against that same Norwegian duo, and it paid off. They took revenge with a dramatic three-set victory after a 16-14 win in the tie-breaker to push the home side to the final of the Final.

The final against Russia unfolded by the same scenario as the quarterfinal. Van Iersel & Ypma lost the first rubber. Schoon & Stam won the next two. Only this time, the golden match was a three-setter, in which the Dutch team emerged with a 2-1 (21-15, 15-21, 15-11) victory over Russian prodigies Mariia Bocharova & Maria Voronina to put their hands on that precious Daruma doll.