How the Swiss Qualified

How the Dutch Qualified

How the Swiss Qualified

How the Dutch Qualified

The Dutch city of The Hague and more specifically the iconic beach of Scheveningen will be playing host to the CEV Beach Volleyball Continental Cup Finals from June 23 to 26, 2021! The winners of this competition played according to the exciting and highly entertaining ‘country vs. country’ format will secure a spot for their National Federation / National Olympic Committee to compete at the postponed Tokyo 2020 Olympics.

The CEV Board of Administration confirmed the Dutch Volleyball Federation (Nevobo) as the organisers of this Olympic qualifying event at their latest meeting held in late February in Luxembourg. The Continental Cup Finals were originally due to take place in June of 2020 in the Dutch city of Eindhoven. However, the outbreak of the coronavirus pandemic and the postponement of the Olympic Games in Japan’s capital resulted in the decision to re-schedule the second phase and Finals of the CEV Continental Cup to May and June 2021, respectively.

“The Netherlands have a proven track record in delivering major events and the concept they have developed for the Continental Cup Finals makes us confident that our elite athletes will enjoy ideal conditions while they pursue the fulfilment of their Olympic dream. The players have been missing the extra ‘push’ they can get from the audience and we hope that the event will coincide with the return of some sort of normalcy after dealing with the challenges brought by the global health crisis.” 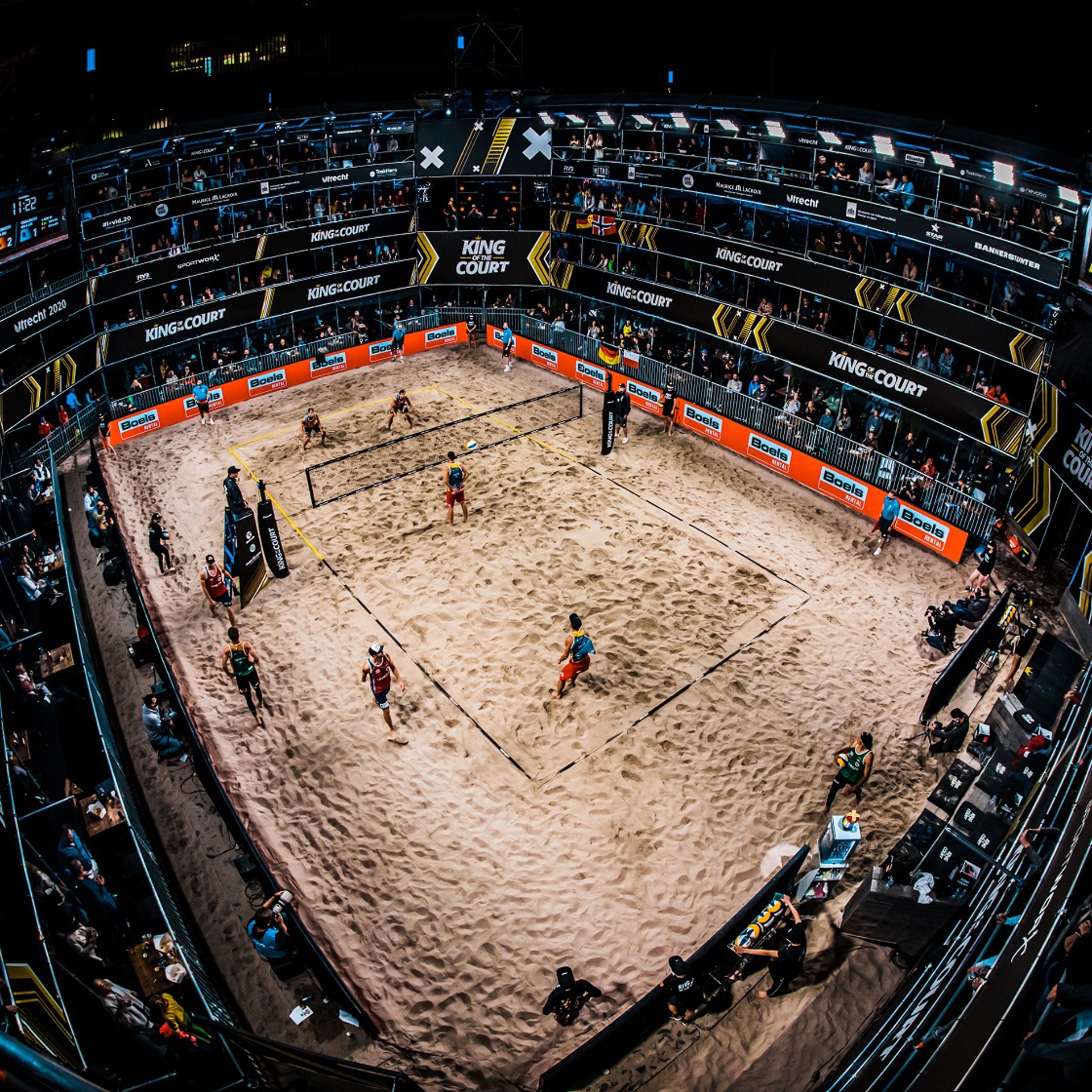 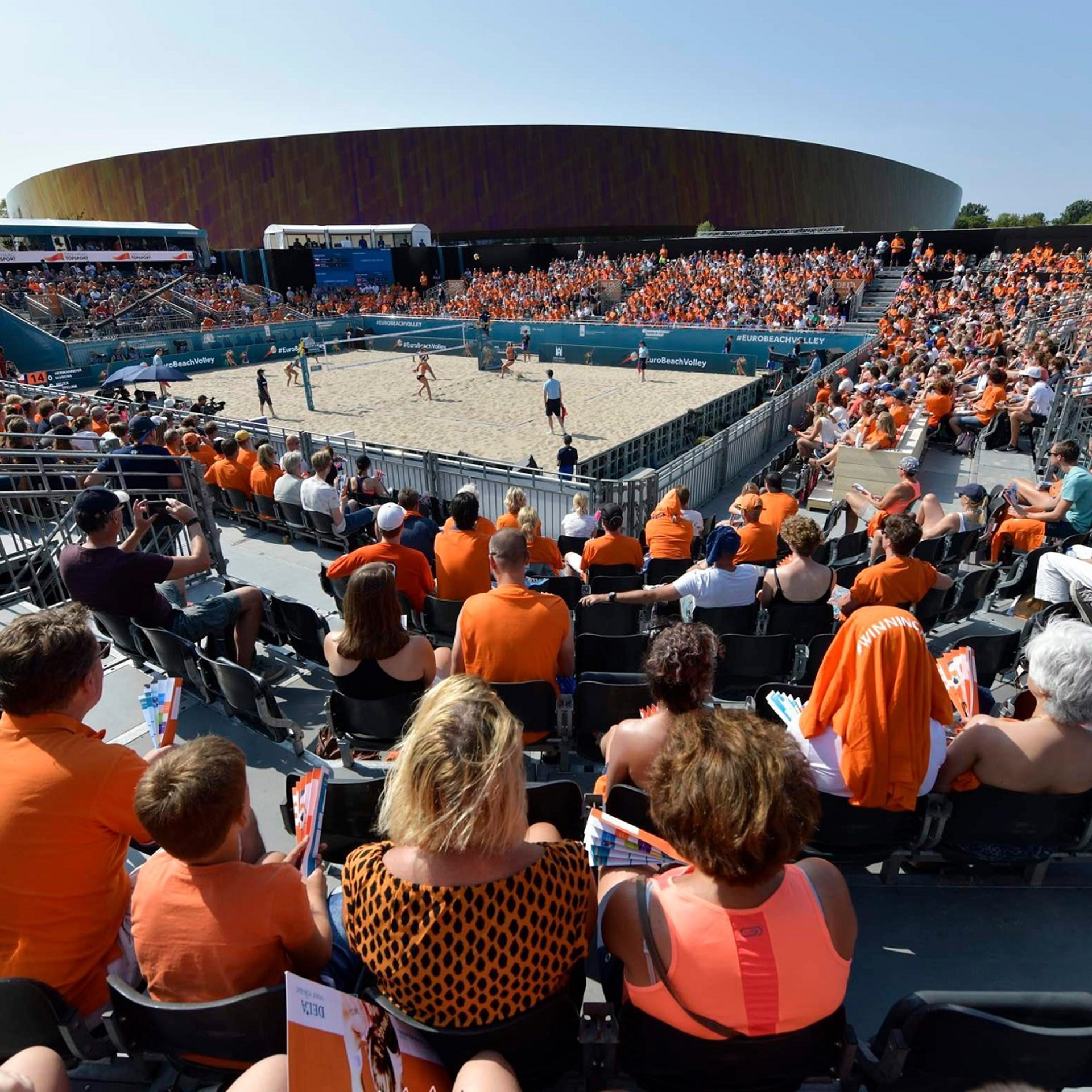 European Championships 2018 in The Hague 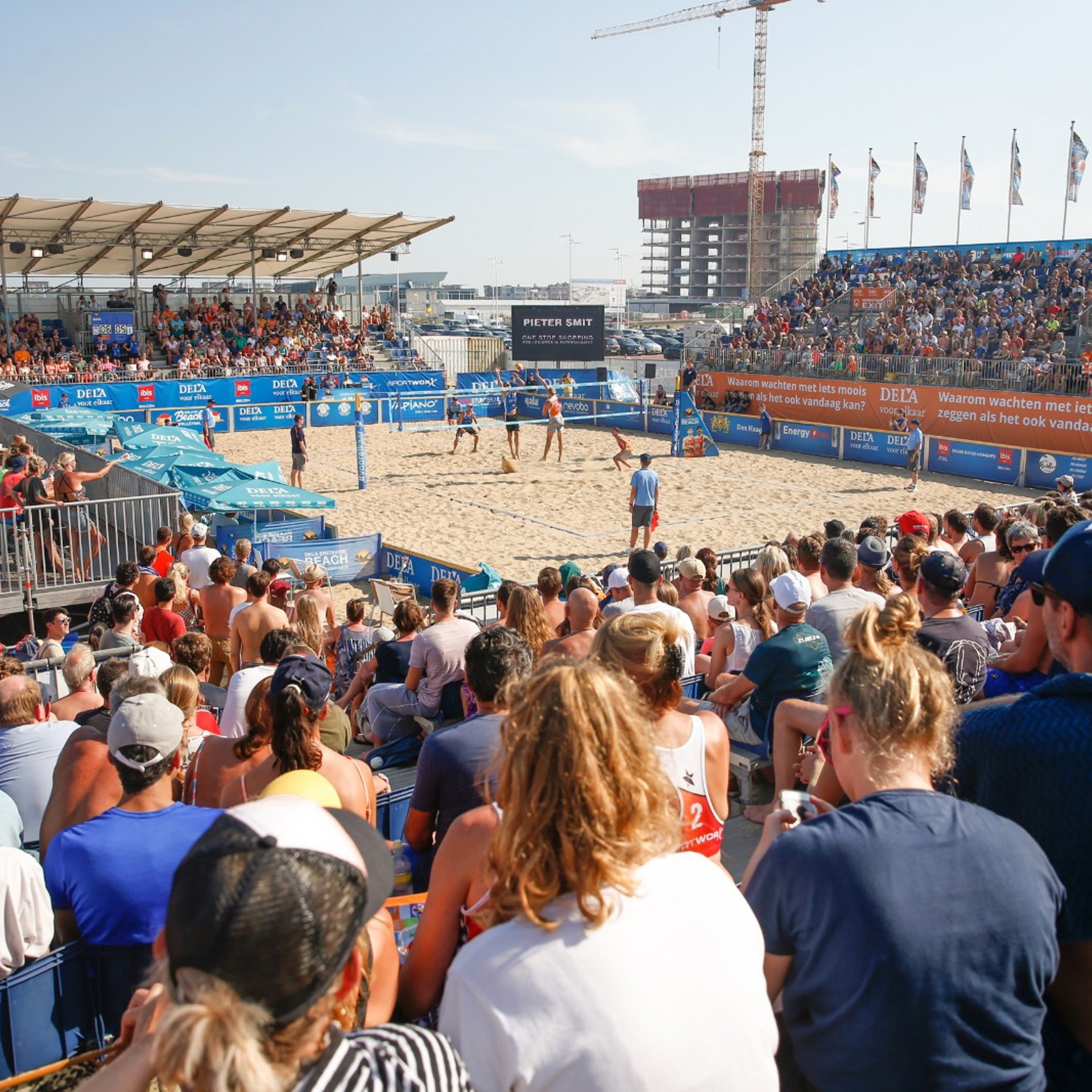 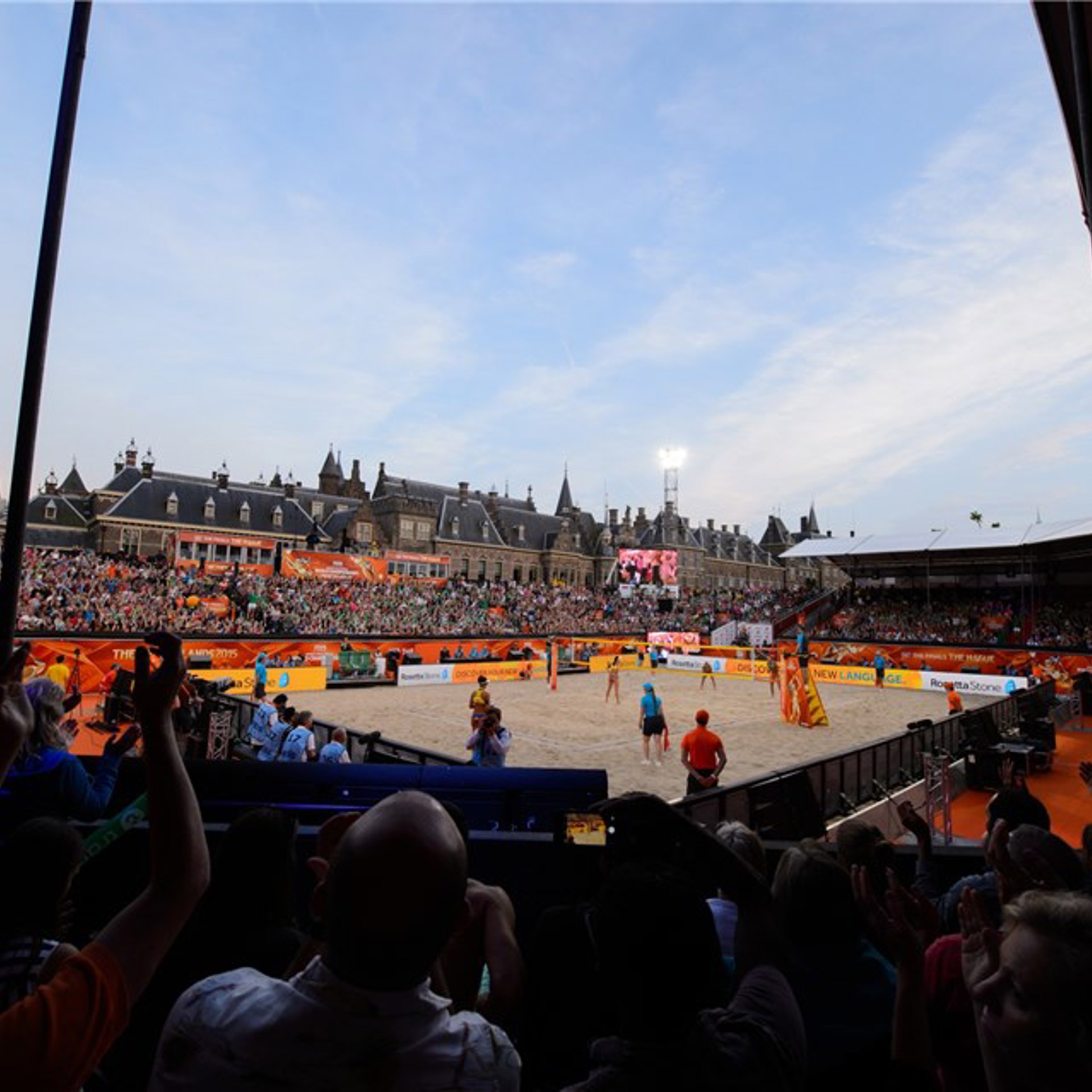 “It is great that we have succeeded in re-organising the Continental Cup Finals. After the cancellation of last year’s tournament, a lot of hard work was done to have this special event in the Netherlands. We have been among the world’s best in Beach Volleyball for years. To be able to host the European Olympic Qualifier is a unique opportunity, for which there is no better place than the beach of The Hague. We look forward to a wonderful battle for the last tickets to Tokyo.”

Background:
Since its introduction back in 2010, the Continental Cup has been a major breakthrough for the Olympic Games qualification system and an attractive alternative qualification pathway for athletes and National Federations around the globe.

The CEV has promoted and supported the competition since the first edition in the spirit of allowing all National Federations a common access point to their Olympic participation dreams.

For the 2018-2020 CEV Beach Volleyball Continental Cup edition, as per the previous editions, and in accordance with the IOC approved Tokyo 2020 Beach Volleyball Olympic qualification system, 1 quota place will be allocated to the winning NF/NOC per gender from the Finals event in June 2021. 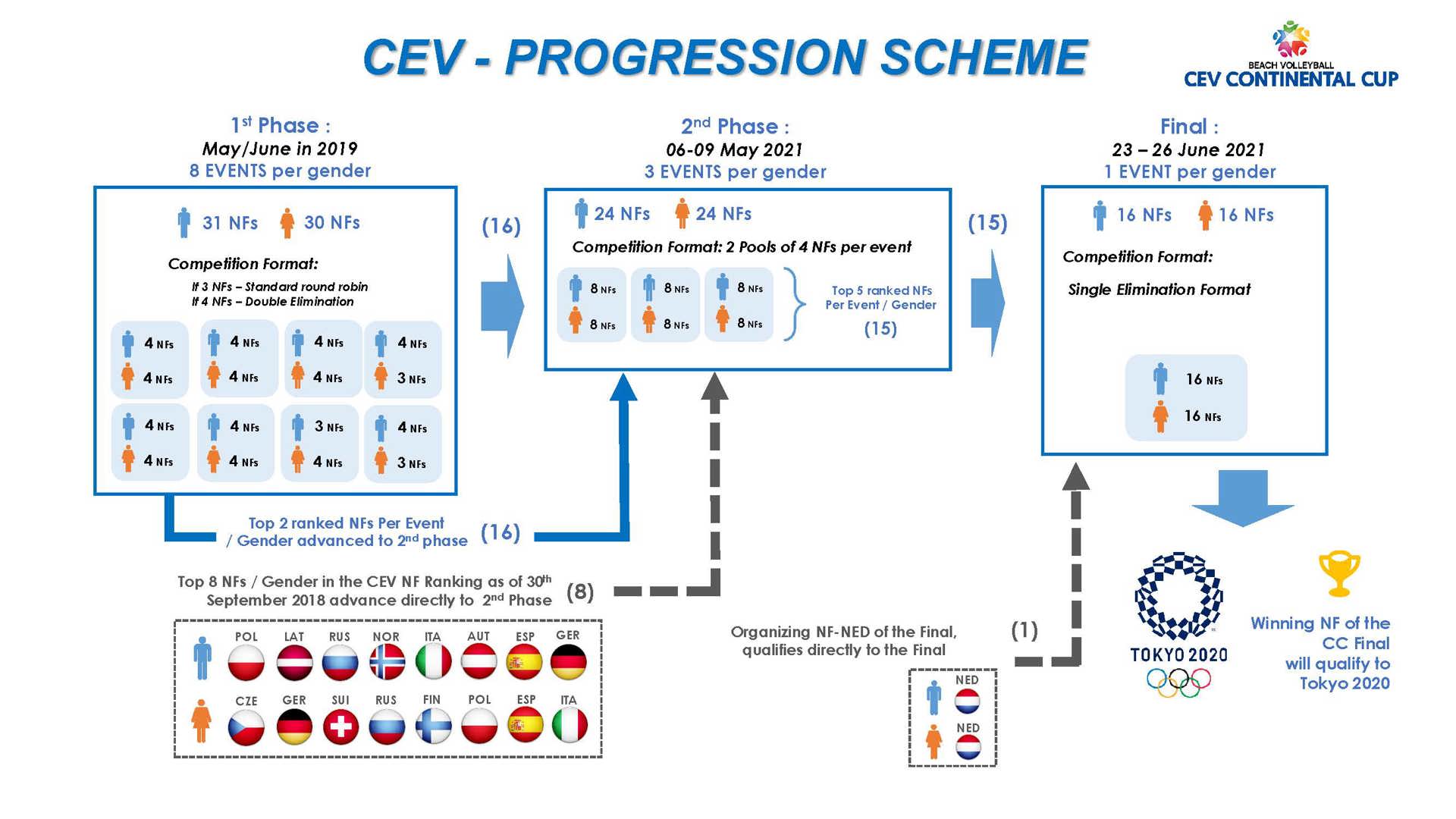 How it works:
- 16 NFs per gender will compete
- Each NF official delegation will have 4 players and up to 2 staff (NF Delegate, coach, doctor or physiotherapist)
- Playing country vs. country matches in a "best-of-three" format
- In case of a tie after the first 2 matches between two NFs, a “Golden Match” will be played
- There will be between 30-45 matches (depending on number of Golden Matches)
- For the Golden Match, the Head of Delegation/captain of the country decides which athletes play (this can be any of the four players from the same country).
- The sequence of matches will be:
• 1) (Higher seeded NF) team 1 vs (Lower seeded NF) team 2
• 2) (Higher seeded NF) team 2 vs (Lower seeded NF) team 1
• 3) “Golden Match” – in case of tie in win and lost matches
- There will be a minimum break of 45 minutes between the end of the 2nd match and the start of the Golden Match

Entries:
The CEV Entry Ranking is calculated by adding each player’s FIVB Beach Volleyball Ranking Points. The entries in regard to participating NFs will be available following the end for the CCUP 2nd Phase tournaments played in the period 6-9 May but will be confirmed following the end of the Olympic Raking period on June 13th, 2021 and is in line with the eligibility criteria set by IOC and FIVB.

Qualification:
The second phase of the Continental Cup took place in early May in Baden (Austria), Madrid (Spain) and Izmir (Turkey) and defined the countries joining the Netherlands at the Olympic qualifying Finals in The Hague.

CEV Continental Cup is a quadrennial beach volleyball competition open to the national teams of all member federations. It provides one of the opportunities for countries to qualify for the Olympic Games. The first CEV Continental Cup was held from 2010 to 2012, ahead of the London 2012 Olympics.

For men, Norway were the first winners of the first CEV Continental Cup, with Austria winning the second edition in 2016.  While for women it was Russia who won the in 2012 and the Netherlands in 2016.